EUROPA DONNA’s 9th Pan-European conference in Stockholm was attended by a record 230 Coalition members – breast cancer advocates, nurses and other breast cancer specialists – to celebrate its theme "Communication and Collaboration". The attendance included a number of Irish delegates, with the usual strong delegation from the Bray Cancer Support Centre. It also marked the Coalition’s 15th anniversary with a Presidents’ Panel, including five presidents who have witnessed the Coalition’s growth to 44 member countries and its expanding influence across Europe.  We were very pleased that our Chairwoman, Christine Murphy Whyte, was re-elected to the Board for another three years and will continue her role as Vice President.

In her introduction, Ellen Verschuur, EUROPA DONNA President, said, "The combined theme of this conference is in line with the core function of EUROPA DONNA, Communication and Collaboration, representing two essential tools in the world of advocacy. Communication and collaboration between the member countries is imperative because in this way there can be a mutual understanding of issues and needs. Communication also plays a very important role in the relationship between advocates and stakeholders of breast cancer care." 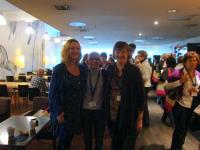 Dympna Watson, Alison Sainsbury and Deirdre O'ConnellIn the key-note address, world-renowned authority and pioneer of mammography screening, Dr. Laszlo Tabar, Professor of Radiology at the University of Uppsala School of Medicine, emphasised that breast cancer is not a systemic disease but primarily a surgical disease, if it is detected early enough. He added that mammography has brought about a revolution in breast cancer detection and treatment and that treatment and terminology must evolve accordingly.

Dr. Alberto Costa, Director of the European School of Oncology in Milan, presented the many facets of breast cancer and surgical options. He explained that breast cancer is defined by eight parameters, i.e., tumour size, histotype, lymph node status, tumour grade, hormone receptor status, proliferation index, vascular invasion and HER2 status. The combination of these factors makes for more than 200 breast cancer profiles, and minimum effective treatment must suit each type of cancer and each woman.

On behalf of Dr. Marco Rosselli del Turco, EUSOMA President, Dr. Costa also presented the requirements of specialist breast units and the need to advocate their implementation since the European Parliament Resolution on Breast Cancer calls for their provision across Member States by 2016. He suggested co-operation between EUSOMA and EUROPA DONNA in creating a European observatory for breast unit implementation, developing a patient satisfaction survey and launching new campaigns for breast cancer prevention. 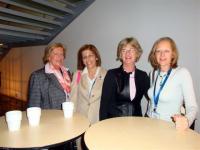 Nicole Zernik (France), Stella Kyriakides (Cyprus), Susan Knox (Executive Director) & Christine Murphy-WhyteDr. Jonas Bergh, Scientific Director, Karolinska Oncology at the Karolinska Institute in Stockholm, described the history of targeted treatments beginning with the discovery of endocrine therapies such as tamoxifen. He emphasised the importance of targeted trials to best identify patients who will benefit from targeted treatments. A case in point was identifying women with tumors overexpressing HER2/neu who were thus candidates for trastuzumab) therapy. He concluded that uptake of new drugs in EU13 countries has increased, but the cost of new targeted drugs remains a caveat.

On the topic of follow-up after breast cancer, Ailis Ni Riain, Director of Advocacy and Professional Competence at the Irish College of General Practitioners in Ireland, said that follow-up is an important issue since more women are living longer after breast cancer: the current 20-year survival rate is greater than the five-year survival rate was 30 years ago. She said that the current situation indicates that hospital-based follow-up is not particularly effective and other options should be considered, such as care provided by GPs or specialist nurses. She added that follow-up care performed by trained primary care physicians working in an organised practice setting had comparable effectiveness to that delivered by hospital-based specialists in terms of quality of life and time to detection of distant metastases. In conclusion, she said that follow-up programmes based on regular physical examination and yearly mammography alone are as effective as more intensive approaches in terms of timeliness of recurrence detection, overall survival and quality of life. 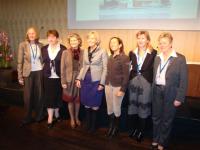 Christine with Board members from Ukraine, Turkey, Holland, Switzerland, Luxembourg & SwedenIn a joint presentation, EUROPA DONNA Board members Bettina Borisch, from the Institute of Social and Preventive Medicine at the University of Geneva, and Astrid Scharpantgen, Coordinator of the Mammography Programme for the Ministry of Health in Luxembourg, discussed the role of lifestyle factors in breast cancer risk. The role of physical activity in breast cancer prevention – the focus of this year’s Breast Health Day – is well established since exercise has a direct effect on oestrogen production.

The first of two workshops was dedicated to specialist breast unit implementation. In her introduction, Stella Kyriakides of EUROPA DONNA Cyprus and a EUROPA DONNA Past President, pointed out that women have the right to high-quality breast care in a specialist breast unit as stipulated in the European Guidelines for Quality Assurance in Breast Cancer Screening and Diagnosis and the European Parliament Resolutions on Breast Cancer. Christine Murphy-Whyte, EUROPA DONNA Vice-President, presented the Irish experience in which high-profile cases of misdiagnosis and an active response by advocates led to a revision of the quality of care provided in specialist breast centres. The ensuing discussion covered topics such as the importance of knowing how to speak to the media, of having a “clinical champion” who is well connected with doctors, politicians and advocates, and of being able to offer alternatives in response to possible resistance.

Workshops on organisational development and fundraising emphasised the importance of "Communication and Collaboration" between Fora, so that the more established Fora can share experience with those that are less established. Numerous fundraising strategies were reported, including: donations, social marketing, tax deductions, companies donating a percentage of profits of a certain product, events such as concerts, walks, fashion shows, dinners, lotteries. Holding a EUROPA DONNA walk on a set day throughout member countries was suggested.

A journey through EUROPA DONNA’s history as Europe’s breast cancer advocacy organisation was provided by the Coalition’s five presidents, Gloria Freilich (Founding President), Mary Buchanan, Stella Kyriakides, Ingrid Kössler and Ellen Verschuur (current President). The Coalition’s milestones were reviewed, such as its inclusion as an equal partner in the European Breast Cancer Conferences, its work at a European Parliamentary level with the adoption of the Breast Cancer Resolutions and the publication of the EU guidelines, the creation of All-Party Parliamentary groups, and its Strategic Plan. Views of the future included achieving certification of specialist breast units, extending EUROPA DONNA activities beyond Europe, ensuring support and development of current members, creating more partnerships, continuing to address women with special needs, increasing public relations, and achieving membership of all countries in the WHO European region. 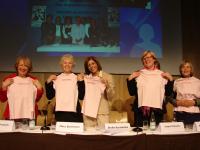 As usual the Conference was very enjoyable, not only for the informative papers, but also for the chance to meet delegates from so many different countries. There was no shortage of discussion outside the formal sessions, as women exchanged information and experience. Many of the delegates praised the EDI leaflet, 9 things you should know about breast cancer, and want to translate it! Communication and collaboration take many forms – not least in mass singing and dancing along to the ABBA tribute band who played at the conference dinner!

A more extensive report on the Conference and the 15th anniversary activities will be produced by the end of the year.