The limited edition quirky packable tote features the designer's signature character, Miss Marc, wearing a “Fight Like a Girl” tank and red boxing gloves. Don’t let Miss Marc’s big grin fool you, she is feisty and tough – and most importantly, she’s a survivor.  Her power: all of the proceeds from the sale of these special designer totes will go to Action Breast Cancer (a programme of the Irish Cancer Society) and Europa Donna Ireland (raising awareness of breast cancer issues in Ireland).  Now that's a cause worth fighting for!  The tote was launched exclusively at Brown Thomas and BT2 stores on 29 April  2011.

In Ireland, latest data shows that 2,766 cases of breast cancer were diagnosed in 2009 and women have a 1 in 9 chance of developing breast cancer during the course of their lifetime. 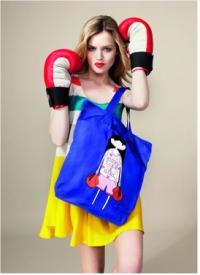 Georgia May with tote bagMarc Jacobs has the midas touch when it comes to style and an innate ability to design clothes that people want to wear. Whether he designs a handbag, a dress, a men’s tee, a shoe, or even an iPad cover, it's always effortlessly cool and desirable.  He has a legion of celebrity followers including actresses Leighton Meester, Nicole Richie, Alexa Chung, Cameron Diaz, Jennifer Lopez and Anne Hathaway, as well as the original supermodels Helena Christensen, Kate Moss, Naomi Campbell and Claudia Schiffer.  His muses include Sofia Coppola, Charlotte Rampling, Winona Ryder, Dakota Fanning and Victoria Beckham, who have all been photographed by Juergen Teller for past Marc Jacobs campaigns.

Marc Jacobs is particularly delighted to collaborate with Brown Thomas on this year’s Fashion Targets Breast Cancer™ Ireland campaign as he is celebrating the 10th Anniversary of his hugely successful Marc by Marc Jacobs label and is also opening an exclusive Marc by Marc Jacobs accessories boutique in Brown Thomas Dublin, which will no doubt be the ultimate destination for his legion of Irish fans!

Dympna, Betty, Deirdre and Marie at FTBC launchSpeaking about the campaign, Marc Jacobs commented, “I am really excited to be a part of the campaign against Breast Cancer. Thank you to Brown Thomas and to all of our customers in Ireland and around the world for the support of this worthy cause."  Watch the video of launch.

Now in its seventh year, the Fashion Targets Breast Cancer™ campaign has gone from strength to strength in Ireland, having raised just over €570,000, initially through the sale of the bull's eye target t-shirts and over the last three years, the hugely successful tote bags designed by Diane von Furstenberg, Orla Kiely, Paul Smith and Tory Burch.

Georgia May and bagFor the 2011 campaign, Brown Thomas approached celebrated designer Marc Jacobs to design a bag which would appeal to women of all ages in the fight against breast cancer.  The resulting limited edition packable tote bag, which incorporates the distinctive FTBC bull’s eye target logo, will undoubtedly be the “must-have” tote bag of the summer.

Naomi Fitzgibbon, Cancer Information Services Manager of the Irish Cancer Society commented, "We have been so privileged to have been the beneficiary of monies raised from the annual FTBC campaign since 2005. Monies raised have gone towards the development of services providing information, advice and support to women concerned about or affected by breast cancer.  We have channeled FTBC funds in the provision of our National Cancer Helpline (Freefone 1800 200 700) which is staffed by specialist breast care nurses. We also produced a range of materials to promote breast awareness and materials on the issues and challenges facing women with breast cancer and services and supports that are available. In addition, we hosted a national conference for women diagnosed with breast cancer and trained Reach to Recovery volunteers who are breast cancer survivors themselves to provide peer support to newly diagnosed women."