Christine Murphy-Whyte and I, Chairperson and Vice-Chairperson of EDI, were invited to attend the first LIVESTRONG Global Cancer Summit and joined 500 delegates from over 60 countries at the RDS.

Christine Murphy-Whyte and I, Chairperson and Vice-Chairperson of EDI, were invited to attend the first LIVESTRONG Global Cancer Summit and joined 500 delegates from over 60 countries at the RDS. The invitation was extended following Christine’s submission of EDI’s commitment to campaigning to raise the voice of the breast cancer survivors, patients and their affected family and friends through several initiatives, among which is the development and nationwide distribution of an information leaflet and the hosting of Breast Health Day on October 15, 2009 which focused on the importance of exercise. 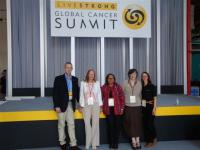 Christine and Deirdre with delegates from Cancer Voices, South AustraliaThe Global Cancer Summit was a truly global event and a large proportion of the delegates were from Africa, Asia and South and Central America, lending a perspective to the debate not found at events where most attendees are from the developed world. At my table at one of the workshop sessions were a retired Indian business man who lost his wife to breast cancer and has devoted his life to setting up India’s first mobile mammography service, a Malaysian woman doctor whose mother had died of liver cancer, a woman from Tanzania whose association spreads information about breast cancer and the importance of early detection and a US State Department employee who works in the health section of the Department and is herself a survivor.

The aim of the Global Cancer Campaign is to build action on a worldwide scale to combat cancer – soon to be the leading cause of death worldwide – and to make cancer a global priority. The Lance Armstrong Foundation made this commitment after its worldwide research revealed widespread misconceptions, stigma and lack of awareness associated with cancer. 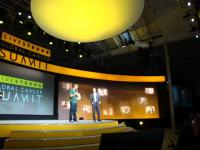 Lance Armstrong and Doug Ulman on stage!In response, the LAF established the LIVESTRONG Global Cancer Campaign to urgently address the burden of cancer worldwide and support the 28 million people living with cancer around the globe. Cancer kills more people every year than AIDS, tuberculosis and malaria combined.The tone was set by Lance Armstrong in his introduction to the programme: “Together, through our collective action, we can empower cancer survivors and effect global change”.

The programme covered the global impact of cancer and its implications for governments, making the case for acting urgently to address the global cancer burden and calling for new commitments to cancer control. A major contribution to the increasing cancer burden was outlined in a comprehensive report on tobacco, now being targeted by the industry at developing countries. Another report, commissioned by LIVESTRONG, detailed the growing economic and social impact of cancer world wide. Stigma is a significant problem in many countries and this can kill. For example, women in some parts of the world are usually diagnosed with breast cancer very late, often because they fear the reaction of their husbands, who commonly abandon them when the disease is diagnosed. Countries with a national cancer plan did considerably better than those without and all countries were urged to develop such plans. 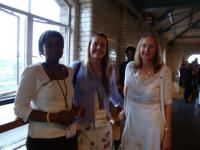 Christine with delegates from Zimbabwe and the UKThe panels for the various sessions comprised experts (medical, economic, etc.), government ministers (including Mary Harney TD), community activists and, of course, cancer survivors. Enjoyable social events in the evening afforded the chance to meet a wide range of delegates. One of the last sessions covered use of the new digital media, the strength of which was demonstrated by Lance Armstrong’s experience, when a single Twitter message brought 1200 cyclists into the Phoenix Park to join him for a bike ride – much to his delight!

The Summit was very well organised and we are glad to say that one of our committee members, Marie Ennis, contributed by volunteering her very able services!